At the appointed time

I've been finding myself reading a bunch of fantasy novels recently, and mostly enjoying them after not having anything to do with the genre for several years. However, I'm really finding that some of the tropes annoy me. They make for good storytelling, and I understand them from a dramatic or authorial point of view, but they frequently make me want to bludgeon the offending characters to death with a shillelagh after applying electrodes to their sensitive parts.
The worst of all is the mysterious helper who clearly knows what's going on, but won't say, because the time is not yet right. Sorry. The Time Is Not Yet Right. You have to say it in a portentous, pompous, know-it-all voice, with capital letters.
Imagine you're the hero. You find yourself attacked by weird beasties, and then you're told you have to go to somewhere, retrieve a MacGuffin, and then save the world, but first you will have to face some major opponent, and the fate of the world rests upon you. So of course, you want to know as much as possible before you set off. What the hell are these things? What can they do? How can they be defeated? What's the big bad nasty? Does it have a weak spot? And is there anything else you can tell me to give me an edge? Because, you know, the fate of the world is at stake. It would be kind of useful.
Then this wise guy turns round and basically says, "well, I know, but I'm not telling."
Really?
Thanks for nothing, buddy.
And then - even worse - he probably gets killed a few chapters later without divulging the precious secret. It's not like you didn't have enough on your plate what with saving the world, now you have to figure it all out on your own, because this guy who was supposed to be on your side reckoned it would be more cool to be mysterious and withhold vital information from you. That makes him kind of an asshole, don't you think?
Posted by Matt Kelland at 9:51 PM No comments:

Driving home from South Florida today, we cut across country from Fort Myers to Orlando on US-17. It goes through rural Florida, nowhere near the coastal towns or theme parks, through small towns like Arcadia, Fort Meade, and Winter Haven. 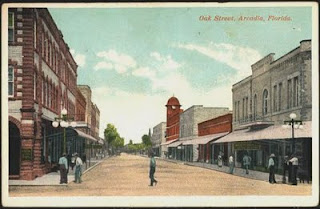 Arcadia, FL
If you Google for any of these small towns, they appear to be charming, quaint little places with gorgeous historic districts and thriving communities. Much like, it must be said, the sort of rural towns in England where I spent most of the last forty-odd years. 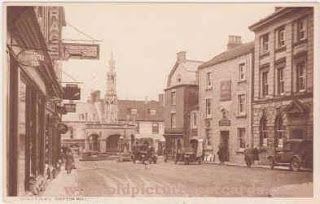 Shepton Mallet, Somerset, England
They're not. They're mostly dilapidated, ramshackle places where the majority of people seem to be barely scratching a living from whatever local industry is around and the harsh climate of Florida. In one place, there's a citrus processing plant. In another, there's a giant Wal-Mart warehouse. The so-called historic districts are sometimes just a few buildings, and they're clearly just clinging desperately to some semblance of dignity. In Arcadia, over 25% of the population is below the poverty line, and a typical family earns under $20,000, compared to around $40,000 in Orlando, over $45,000 here in Casselberry, and nearly $75,000 in Winter Park.
As you drive through these towns, you can't help but notice the shuttered up shops and the empty businesses. What little remains is mostly Mexican supermarkets, Mexican diners, and occasional auto repair shops that usually consist of some guy's garage with a load of rusted vehicles outside and hand-painted signs that feel more like a plea than an advertisement for services: Cars Fixed Very Chep + Used Tires. There's no Starbucks here. Even McDonald's don't see a market in these places. Just churches, churches, and more churches. All these people have got going for them is a promise it'll be better when they're dead. 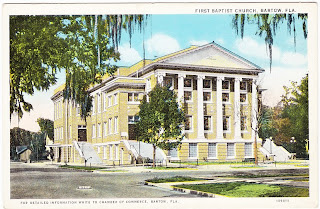 Baptist Church, Bartow. Most of the churches on US-17 aren't this impressive. They're one-room affairs with a crucifix nailed to the roof and little more.
There aren't even many actual houses in evidence, and most of those are covered in peeling paintwork, their porches hanging off, and their windows taped up. Most of what you see are mobile homes and trailers, generally surrounded by the decaying detritus of the truly poor: a broken refrigerator, half of several bicycles, bits of engines, and undriveable cars up on blocks. Unusually, there aren't even many American flags to be seen, and you begin to wonder whether that's because they've been stolen, or whether the majority of these people are immigrants. It's hard to believe they don't have pride in their country: this is usually where you find the staunchest, most patriotic Americans. 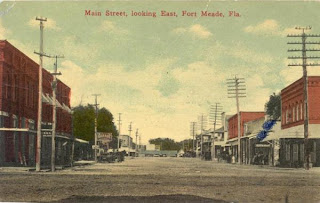 Fort Meade, FL
I've driven along this road before, but this was the first time it really struck me how different it was to the parts of America I usually see. Superficially, I think I was expecting it to be much like the sort of rural towns in England where I spent most of the last forty-odd years. Poorer than the cities, and lacking the bright lights, not as quaint and pretty as the postcards make out, but still mostly civilised.
It's not.
It's like this part of America was just forgotten and left to die.
Literally. Oak Ridge Cemetery: photo by Ebyabe
Life expectancy in these towns is twelve years less than in the rest of Florida. The richer parts of Florida have the highest life expectancy in the world after Japan. But if you live in one of these towns, you can expect a shorter lifespan than your typical inhabitant of Libya, Tunisia, the whole of South America, and the whole of Asia except Afghanistan and Burma. As long as they keep shipping the oranges to the rest of the country, that's just fine by everyone else.
Today wasn't the day for it, but some day soon I really want to drive back down US-17 and photograph what I see. Not the gussied up civic buildings you see in this post, but the endless, depressing existence of the America which the tourists never see, the politicians prefer to ignore, and the affluent don't want to think about.
Posted by Matt Kelland at 8:10 PM 2 comments:

In Praise Of Boobs

Werner Herzog's Cave of Forgotten Dreams is an extraordinary film. If you're an artist or an archaeology nut, go and see it on the biggest screen you can manage, in 3D. Ignore the fact that it's repetitive, and ignore most of the bits when people are talking. It's worth it just for the incredible footage of prehistoric art from 30,000 years ago. The artistic style of these ancient painters was unexpected. Egyptian and Babylonian art, some 25,000 years later, is highly stylized, with simple outlines and profile views. These images of horses, lions, and other animals are often fully shaded, with 3/4 views.
The 3D gives you a real sense of the shape of the rocks and how the paintings flow over them, and the camera gets in so close you can see every line, from the subtle shading on a horse's mouth to the fur on a bison's shaggy mane. It's more than you'd ever see if you went there, and you'll never be allowed inside the cave anyway because the environment is so fragile. It is a quite breathtaking cinematic experience.
So why the title of this piece?
I was already familiar with the cave paintings and the prehistory, and was mostly just absorbed in the imagery rather than listening to the narration. The one thing that really struck me was this little lady, who got a mention in passing. She's the Venus of Hohle Fels, and at around 35,000 BC, she's the oldest piece of figurative art in the world. She's less than three inches high, she was found in 2008, and she's one of the most important milestones in human history.
She was carved from a mammoth tusk at about the time Homo sapiens and Homo neanderthalensis were jockeying for supremacy. Neanderthals, contrary to what we all believed when I grew up, were stronger and smarter than sapiens. They had bigger brains, and as far as we can tell, they had similar social organisation, similar weapons, and comparable technology. Yet the inferior sapiens - that's us - won.
So what was the difference? Well, the only thing archaeologists can point to is that Homo sapiens created art. He learned to make symbolic representations of his world. Which, apparently, paves the way for religion, stories, and a whole bunch of new forms of thinking. And just look at what the very first sculptors made - carvings of women with oversized breasts. An ancient fertility icon, or the prehistoric equivalent of Playboy? We don't know. We'll never know. But we do know that it's what made the difference between the winners and the losers in the struggle between two species for global supremacy.
So, archaeologically speaking at least, that's what makes us human. An appreciation of boobs.
Because otherwise, we'd all be Neanderthals.
Posted by Matt Kelland at 5:27 PM No comments: