What role does Twitter play these days? A year or so ago, I twittered a lot. These days, I check the Moviestorm Twitter feed more often than I check my own, and most days I don't tweet at all. Facebook, for all its faults, seems to have completely supplanted Twitter in almost every respect.
There are two clear signs that Twitter is losing ground, not just in numbers, but in the way it's being used. Most obviously, it's no longer a place for conversations. In 2009, you could tweet a comment, and people would tweet back. To be sure, they were awkward, stilted conversations, but they happened. Nowadays, very few tweets elicit any reply at all. By contrast, almost every post I make on Facebook gets a response, and often several. It's not just what's being said, it's that Twitter simply isn't a good medium for conversation. If you look at those people who link their FB and Twitter feeds, you can quickly see the different reactions they get to the same posts on each. Twitter's not threaded, so you have to keep track of the conversations the old way. And there's no simple mechanism for replying to everyone who's interested in that thread; all your tweets are either completely public or directed at specific individuals. What's more, Twitter has no equivalent of the much derided "like" button. This simple interaction is a remarkably useful piece of social structure. It's the equivalent of a smile; a non-verbal way to show that you appreciate what's being said. It doesn't necessarily advance the conversation, but it does give people social standing and allow people to be involved in a passive, but overt way.
The second, less obvious symptom is the huge downturn in retweets and sharing on Twitter. I recently read a piece by Seth Godin in which he noted that only about 1 in 6 tweets gets retweeted. That was written in early 2010. Looking at my feed now, I'd say it was more like 1 in 30. Most of what gets put on Twitter goes no further. Most of what I see retweeted is from celebrities like Stephen Fry or Warren Ellis, which is strange when you think about it for a moment - they have millions of followers, and everyone who's interested in them follows them anyway, so who are these retweets aimed at?

A Twitter link: it's almost like reading code, and I have to open a browser to see what's at the other end.
Compare that with Facebook, where sharing is common. Again, it's not the content, it's the medium. Part of it is that Facebook is a much richer experience. If I want to link to a video, you can see a thumbnail, read a description, and then watch that video right in your browser. The same link in Twitter consists of a shortened URL (which tells you nothing) and a few words, then you have to go somewhere else to see what I'm showing you. Then, if you like it, go back to Twitter, find the post, and retweet, probably trimming 16 more characters off the description to allow room for RT @MattKelland: at the beginning. Tweets are almost like little ciphers, filled with strange hashes, disemvowelled words, bizarre characters, and geeky things that look like code. Facebook, by contrast, is more like the language we speak.

A Facebook link: useful information, immediate feeling of community from the likes and comments, easy ways to interact and share, and I can watch it right there.
It feels as if Twitter has outlived its usefulness. It went from the preserve of a few tech addicts to a vehicle for celebrities and brands to push out robotic marketing messages. Tweet about visiting a friend in Chandler's Ford, and you'll find yourself followed by Ford dealerships wanting to tell you about their special offers. Say you're moving your Web site to a new server, and you'll get bombarded by removal companies, software companies, and Web designers. Sure, it's a great way for the Governator to tell millions of people what he's doing, but everyone else is lost in the noise. And there's a lot of noise. Twitter never did have a very good signal to noise ratio, but it's gone from the gossip of a coffee shop to the hubbub of a giant mall.
There's a lot wrong with Facebook, but it seems to provide a far better communication medium than Twitter. And, of course, they have a proven, successful business model, which Twitter doesn't. I'll be interested to see whether Twitter turns into the MySpace of 2011.
Posted by Matt Kelland at 8:52 PM No comments: 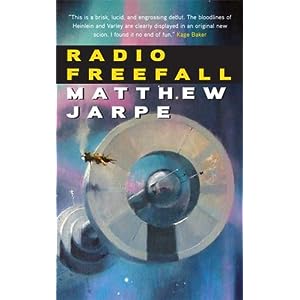 My Christmas read (on paper, not a Kindle, amazingly) was Matthew Jarpe's debut novel Radio Freefall from 2007. It's labelled cyberpunk, but it's really more cyberprogrock. The lead character, after all, is named after a Jethro Tull song, Aqualung, and it's filled with references to all sorts of music.
Locus described it as "rollicking", and that's pretty dead on. It involves everything you want from this kind of novel; rich corporations trying to take over the world, sentient computer viruses, long-dead rock stars, hackers, mobsters and lunar colonies seeking independence. Jarpe also throws in some political comment with remarkable relevance to recent headlines. At one point, a bunch of kids are protesting. Our protagonist grabs a camera and microphone and talks to them, pointing out that "people don't throw bottles of gasoline if you let them speak, but just one person in power telling them that their voices don't matter is enough to turn them ugly."
My favourite ingredient in the mix is what they call The Machine. It's a device designed to manipulate an audience's emotions, and they use it as the best warm-up band ever. Personally, I think of it as "what would have happened if Hawkwind had been able to get their hands on alpha wave generators and the Internet". A truly scary, but entertaining prospect. Lemmy and Dave Brock with that kind of technology?
I ripped through it in two sittings, and only put it down because it was Christmas Day and the family demanded my presence. Well worth reading. Here's the first chapter for you, free.
Posted by Matt Kelland at 3:10 PM No comments:

The hardest part of making any business plan is always when you know you've got a cool idea, you know how to make it work, but you can't make the numbers come out right for it to be a viable business. You're left with three options.
The thing is, loss-making businesses are not necessarily bad. Some of the world's most successful businesses spent years losing money before becoming profitable, and the big win didn't always come from where they expected it. They just had to stick around and keep the faith long enough to reap the rewards.
And sometimes, it's perfectly OK for a business never to make a profit. Look at people creating little niche products: specialist magazines, custom artwork, small bands, amateur theatre groups, and so on. It costs them money to make that stuff, and they rarely get back as much as they spend. But they enjoy doing what they do, and by getting something back, they can afford to keep doing it and making people happy.
Yes, business is first and foremost about making money, but the bottom line needn't be the bottom line.
Posted by Matt Kelland at 4:24 PM 2 comments:

One of those commonplaces of modern marketing is that overnight successes take a hell of a long time to manufacture. It's only the punters who think they're spontaneous. Seth Godin, however, takes a slightly different view, and puts his finger on what makes an idea viral.

No-one sends an idea unless:
No-one "gets" an idea unless:
That's why viral marketing and internet memes are so shallow. And, most importantly, ideas never spread because they're important to the originator.

From Small is the New Big, by Seth Godin.
If you don't want to read the whole book, just read this one blog post. Really, do. It'll take you three minutes.

What Every Good Marketer Knows