Why I am not a Buddhist

Earlier this year, I seriously asked myself whether 2011 would be the year I came out and admitted to myself that I am, actually, a Buddhist. My religious/spiritual beliefs are somewhat confusing, even to me. I’ve always felt somewhat religious, even though I know that it’s all a crock, and I’m pretty much a hardcore rationalist. However, no religion I’ve ever found actually seems to suit me.

I’m a bit pagan, in that I do tend to observe the Celtic seasonal festivals, but that’s more to do with marking the passage of time than anything mystical. I’ve messed around with various occult systems, and have found them to be, on occasion, a good way to deal with psychological issues and personal development. (I don’t, for example, believe that casting spells can have any effect; on the other hand, making talismans in a ritual fashion can concentrate the mind wonderfully and help you to focus on the problem you’re trying to address.) I’m definitely not a believer in “big church” religion, and I’m totally opposed to following religious laws that can’t be justified in a modern context, no matter how sensible they were when first conceived.

Since I was about 13, though, I’ve had a fascination with Buddhism, particularly Zen. What I liked most about it was that it was much more about understanding your own mind and learning to live in the world than anything I normally think of as a religion. The Dalai Lama couldn’t be much more different to the Pope – he’s always talking about compassion, kindness, and understanding, not calling down damnation on those who doesn’t follow some archaic teachings, or who follow them in a slightly different way. 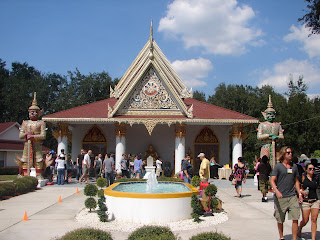 Earlier this year, I went to an Open Day at one of our local Buddhist temples. (The Chinese one, not the Thai one in the picture above.). As always, I was struck by the peace and tranquility, and by the friendliness of everyone, priests and visitors alike. After wandering around for a while, I figured that maybe after thirty years, I should just stop wavering and try being a practicing Buddhist. So of course, I wavered. I loaded myself up with all the free literature I could find, and decided to read a bit more before committing myself. After all, I know plenty about Buddhism, but very little about what it means to be a Buddhist.

Two months later, I’ve decided it’s not for me after all. Of all the religions I’ve flirted with, Buddhism’s still the one I feel most comfortable with, but I wouldn’t be honest with myself if I said it was something I can actually accept. Here’s why.

Now, I’m absolutely not knocking Buddhism. If the world had more practicing Buddhists in it, it would be a much nicer place. I still believe that the Buddhist principles of compassion, duty, and awareness are the way I want to live my life. I just can’t truthfully say that I believe in the religious trappings with which those principles are presented.

I’ll still have my smiling Buddhas by my desk and by my bed, though. Right next to the Ganesha, the mandalas, the Tree of Life, and the Celtic talismans. There’s something in all religions. Just not the religious bit. Not for me, anyway.