Some of you expressed disbelief when I told you how hard I work, and how little time I get for relaxation these days. Well look, here's me in the office, so exhausted by 11am I can barely keep my eyes open. Now do you believe me? Do ya? Do ya? And you still expect me to find time to blog? Over at Moviestorm Towers, we've been thinking about hair. We're planning a hairstyles pack, and so we've been looking at what's possible from a technical point of view, and what's desirable from the movie-maker's point of view. It's one of those issues like grabbing a shirt. What's simple in real life ain't so in animation, and damn nigh impossible in machinima. OK, I might as well 'fess up. I like long hair. A lot. I find it incredibly sensual. And it looks great when photographed too. Perhaps most importantly for the film-maker, it looks amazing when it moves.

It's not just the huge movements that make the difference, although those can be spectacular. It's the small shimmers as the hair blows in the wind, or as the actress turns her head. When hair drapes over the shoulders, it completely changes the shape of the face as the head moves, obscuring different parts of the face and the light catches the hair in different ways. However, you try doing that in machinima. It won't work. It just won't.

For a start, most hairpieces in games are pretty low-poly. They're about as much like hair as the plastic hairpieces you get on Lego characters. They don't move like real hair, they don't shine like real hair, they don't have the translucency of real hair, and they don't have all the different colours of real hair. They're basically simple blocks of stuff that look like they've been attacked with several coats of varnish. That's basically because for games, it doesn't matter too much. The gamer's attention is focused elsewhere.

In a film, however, you're much more likely to want to go to close-up, and so there's much more emphasis on making humans look right. We're not bad at faces these days, but it so often looks wrong because of the hair.

Yeah, so what about Lara Croft's ponytail or the hair in Heavenly Sword, you ask. Surely they're good? Well, true, they do have a basic spring mesh in, and so they do actually move. But let's just mention the dread word "intersection". Machinima really isn't sophisticated enough to replicate how hair actually moves, and really isn't sophisticated enough to model how it drapes over the human body. Watch Heavenly Sword carefully, and you'll see her hair go through her clothes, her shoulder, her legs, her weapons, and itself. It looks pretty awesome in motion when you're in the middle of a battle sequence, but watch the extracts as a piece of film and they just look wrong. With less advanced engines, like Moviestorm, The Sims, or SL, they just don't care: hair will cut through anything. And that always bugs the hell out of me. When machinima can give me hair like this, I'll be impressed. Until then, I'll always be wanting more than is technically possible. Like the shirts I mentioned earlier, it's even a real bastard to do with "traditional" CG animation. There are some things where actors and cameras win hands down.

Oh, and to save me writing another whole post on the subject of things you can't do with machinima: the same goes for long, flowing clothing. I like that too, and machinima just can't do it. Just replace the word "hair" with "cloth" and it's pretty much the same. Bah.

And no, I'm not having a downer on machinima. It's more that after four years working full-time in the medium, I'm getting a strong sense of where its true limitations are, and are always likely to be.
Posted by Matt Kelland at 4:42 PM 11 comments: Reality Checkpoint
Originally uploaded by Matt Kelland
I could have stayed at home today instead of coming into the office. Instead, I wore my warmest Soviet Army greatcoat and my furry Russian hat (made of genuine bear fur), and walked through a magical wintry Cambridge, taking photographs.

There are more on my Flickr site.
Posted by Matt Kelland at 7:43 AM 3 comments:

It’s all changing – but not how you think

I recently read two books about the way the Net is changing the world: The Cult of the Amateur, by Andrew Keen, and Wikinomics, by Don Tapscott and Anthony Williams. They represent two polarised views of the future.

The Cult of the Amateur is a polemic against non-professionals, and bemoans the advent of a world in which blogs, podcasts and home-made content replaces mainstream news and traditional music publishing. Keen predicts a world in which we’re all doomed to mediocrity, and in which true creatives are drowned in a sea of pirate-driven YouTube mashups and sub-Z-list celebrities who are famous for even less than 15 minutes. Worse than that, we’ll all get engulfed in a tide of filth as the Net gets filled with the verbal effluvia of a billion unrestrained proles, and as ordinary people feel the need to bombard us with too much information about their humdrum everyday lives. 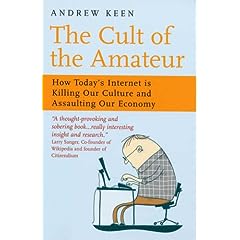 On the other hand, Wikinomics enthuses wildly about a utopian world in which amateurs do everything, disparate, yet altruistic communities all pitch in to do pretty much anything that’s needed, and governments, corporations and individuals all benefit beyond our wildest dreams. Open source will become the de facto standard for everything, and we’ll all get used to having anything we need absolutely free and making donations for those things we consider worthwhile.

Of course, these visions of the future, no matter how convincingly presented, are both utter bollocks.

Keen manages to take a load of interesting facts and then turn them into an unsustainable argument. He has some fair points to make: as we start to read blogs over newspapers, news organisations are under threat. We may say good riddance to the big news media, but let’s not forget that ultimately they are the source that bloggers rely on, and if they disappear, all the bedroom journalists have nothing to draw on. And yes, it is easier than ever before for kids to get their hands on porn and all sorts of unsuitable material. And it’s true, the Long Tail theory doesn’t mean that anyone who fancies themselves as creator can make a living at it, because most people aren’t actually good enough to be worth paying for. But that doesn’t mean that all amateur content is worthless, or that there is no value in repurposed news.

Meanwhile, Tapscott & Williams do a great job of whisking you aloft on a magic carpet of rhetoric until you realise that their argument just doesn’t hang together in the real world. They give an example of an oil company who released all their survey data and then crowd-sourced the prospecting. They found they had a load more oil than they thought and got rich, and a few amateur prospectors got rich. Which all sounds great, but they don’t mention the many amateurs who worked for the oil company for free and got nothing. And while software designed and built by unpaid casual labour is fine, up to a point, would you really want to fly in an aircraft designed by a loose group of aircraft enthusiasts, each contributing to some little part of the blueprint, and released to the public as soon as there’s an early beta?

The absurdity of both positions is amply demonstrated by the recent announcements by Wikipedia and Encyclopaedia Britannica. Wikipedia is, of course, the poster child of the devotees of the amateur. Keen derides Wikipedia, asking how ordinary people can compare with peer-reviewed Nobel prize-winners. We now know that Wikipedia not only has far more content than the Britannica, but also, incredibly, the same level of accuracy, and it’s free. But in the last couple of weeks, Wikipedia has started talking about wanting peer reviews, and going back on its policy of open editing. And meanwhile, the Britannica, long regarded as the ultimate authority on everything, is now moving towards the position of allowing readers to edit its hallowed entries.

In other words, neither extreme is right. Professional and amateurs need to live together in symbiosis, each professing to despise but completely dependent on the other. We need professionals to provide the core, to set the standards, and to provide the driving force and resources for projects that are too large to do any other way. And meanwhile amateurs, each contributing a little in their areas of interest and expertise, can mobilise a quantity of labour that would otherwise be inconceivable without slave labour or totalitarianism. In the creative world, the vast array of amateurs are the background from which professionals emerge, and in turn, those few professionals are the inspiration for thousands more amateurs.

Which, believe it or not, is the way it always has been, and the way it very probably always will be. Technology makes it easier for amateurs to connect with their audiences, but that’s not a sign that the professionals will be swept aside, because the same technology also makes it easier for professionals to connect with their audiences. What it does mean is that it’s now possible for people to be professional in new ways. Old business models may be changing, and some of the oldest companies may be threatened, but the basic concept that structures our society will remain the same.

There are some people who are good enough and dedicated enough to get paid for doing certain things, and others who just do it for the hell of it. Put those people together and you’ll be amazed what can be achieved.