My ambition is to be a beach bum

I think I've come to the conclusion that my ambition in life is to be a beach bum.

Now, for the benefit of potential employers and others, let me clarify. I don't mean a shiftless, lazy beach bum like Patrick Swayze in Point Break or some college drop-out. I mean a beach bum like Hemingway or Jimmy Buffett, who manage to combine being stunningly creative with spending a lot of time lazing around in or near the water.


I'm serious. I think I'd do really well with Hemingway's Key West lifestyle. Start work at dawn, six days a week, and write until "seven hundred words or lunch, whichever comes sooner." Then do something relaxing all afternoon. For him, it was fishing or sailing; for me, it would probably involve walking along the water's edge and finding a shady place to sit with a book and/or a guitar. Then in the evening, go out and meet people - and, most importantly, listen to them. I'd love to throw some of Buffett's exploration into the mix as well - his journeys through South America and the Caribbean are both fascinating and inspirational.

I think I could be stunningly productive living that way - and I'd be incredibly happy. It's worth remembering that Hemingway wrote just nineteen books in his life, ten of which were written in his twelve years in the Keys. That's less than one a year, which is a fairly modest output by modern standards. (And he managed just nine books in the other thirty years of his working life.) Seven hundred words is a lot when you're typing, but it's a lot easier with a word processor when you can edit as you go.

It's not unusual to retire to the coast. I'd like to get there sooner than that. I was brought up on the South coast of England, and I miss having the sea close by. Palm trees and sandy beaches make me happy. I'm not looking to spend my life in an alcoholic daze or searching for a perfect wave like some aging hippy. I want to find that perfect environment with the combination of relaxation and stimulation, work and play, where my creativity can let rip. Don't get me wrong, I love the Jungle House, and it's by far the best place I've ever lived, but honestly... I'd rather be on the beach. 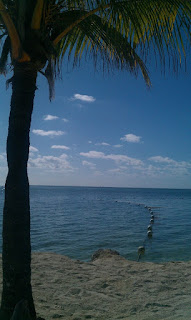