Okay, I'm going to try and lifehack myself. That meme about how my desire to stay informed is affecting my sanity? Well, it's true. And that thing I posted on FB about stress yesterday, and the way it's exacerbated by all the fear that people are pushing?  That's true too. And the cartoon about switching off the TV to stop being terrorized by terrorism? Yup. So it's time to get rid of that stress. 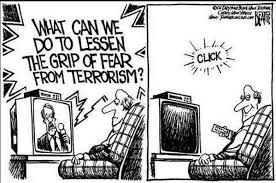 I'm unsubscribing from all the political and activist feeds on my social media. Not because I disagree with them, but because I don't need the constant barrage of negativity. I don't need my awareness raised. I know that poverty exists. I know that big business is greedy. I know that cancer kills people. I know that animals get mistreated. I know that many legal drugs don't work and many illegal ones do. I know that religion causes problems. I know that politicians are corrupt. I know that women and homosexuals get a shitty deal. I know that our energy policy is unsustainable. I'm not learning anything new. I'm just being reminded how fucked up the world is, all day, every day, and getting more examples of the same old issues. It's driving me, quite literally, insane.

And if you post a lot of political or activist stuff, then I'll probably unfriend you or hide your posts. Again, not because I disagree with you or don't like you, but because I don't want to read about that stuff. If FB or Twitter could filter by topic, then I'd filter out those posts, but they don't let me do that.

I may slip. It's hard to disconnect from that overwhelming current of thought. It's an addiction, and it's one that's easy to justify by seeing it as civic duty or intellectual responsibility. If I could go back to 1970s Britain, where I had 15 minutes of TV news once a day, that would be perfect. I could stay abreast of the main stories, focus on the facts, but not get drowned in a 24/7 tide of media trying to outdo each other with who can tell the most terrifying story, like a bunch of school kids round a camp fire telling urban legends.

You may say that I'm just hiding from reality. And yes, you'd probably be right. But my option is to take a bunch of happy pills, keep reading, and not care. I'd rather just walk away. It's not like I can do anything - especially as I don't even get to vote - so I'm being constantly reminded of my own powerlessness. That's not a good feeling. I'm doing this for my own mental health.

It would be different if activism was about spreading positive ideas, about being inspirational, or about having a vision, but it's not. It's about tearing the other guy down, showing how bad things are, and finding someone to blame. It's about why the Republicans are crazy, why the Democrats are evil, why the Christians or the Muslims are stupid, why the scientists are in league with commercial interests, and so on. We've collectively focused on running headfirst into brick walls to prove the other guy wrong instead of finding creative ways to go over, round, under or through them. We're not solving problems, discussing issues, trying to see anyone else's point of view, or compromising. We're locked in an unending partisan battle based on outrage and destruction, not trying to find a way forward based on rationality.

Goodbye, real world. I'm going to start constructing the mental and social world that I want to live in. It'll have music and movies and food and books and stupid animal pictures and spaceships and science and amazing nature pictures and places I want to visit and incredible history and friends who make me laugh... and best of all, it'll have a vision of future I want to look forward to.

In Europe, we have a pretty pisspoor image of America these days. We see the Westboro Butthead Church, asshole rednecks, gun nuts, and idiotic xenophobic warmongers who can't tell one foreigner from another and want to bomb everyone.

But after living here for four years, I have to say that the best thing about America is Americans. Yeah, sure, there are assholes. But you know what? There are assholes everywhere, and the media love to talk about them. The Americans I know are some of the kindest, most generous people I've ever met.

In the UK, I would have had state assistance, for unemployment, for legal bills, and for medical bills. Over here, that hasn't been an option. Instead, friends and strangers have rallied round in a way that I've never experienced before. There's a sense of community that's all but disappeared back home. Yes, British people are helpful, but they know that when things get really bad, there's a safety net. Here, there's nothing. And that's when the community pulls together.

I've been reduced to tears several times in the last few months. Whether it's someone giving us a few hundred bucks for legal fees or medical bills, or a neighbor bringing us a meal because they've realized we're too tired to cook, I've been touched and humbled by the generosity of the Americans I know. Forget the bullshit media stereotypes. Forget the extremists, the fuckwits, and the nuts. They're a minority. Americans are good people, and I'm proud to live among them.
Posted by Matt Kelland at 11:56 PM No comments: