I've never really been a fan of 3D movies. It's always seemed to me like a gimmick, just an excuse to poke things in the audience's face and make them go "oooh", without actually adding anything of interest to the film. But watching Coraline in 3D yesterday has made me begin to change my mind. It actually seems to nearly work.

Before I get stuck into some of the filmic details, I should just say that wearing the 3D glasses is a pain. The glasses themselves are damn good, way better than the old cardboard red/blue ones, and the 3D image is uncannily good, with a great sense of depth. Without my regular glasses, however, I find it hard to see the screen as crisply as I would like. It's not that I can't see properly, but my tired middle-aged eyes do find everything a bit blurry. And these modern 3D glasses, while all very slick, aren't really compatible with my specs. Now it may be that some of the visual issues I experience wouldn't affect me if I had 20/20 vision, but I don't, and neither do a lot of the rest of the population. 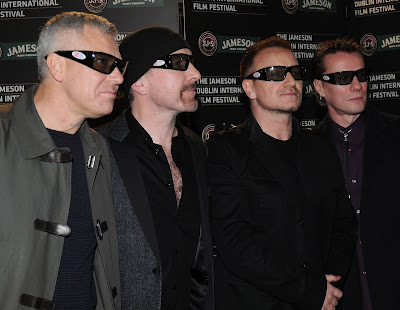 For me, the shots that worked best in 3D weren't the effects shots where things come out of the screen at you. I mainly found them tawdry and predictable. What worked well were the shots where they just added depth, and created a heightened sense of realism. Looking out through woods over a valley to Coraline's house (don't worry, no spoilers) looked truly amazing, and for the first time I got a sense of how flat 2D films and photographs actually are by comparison. What was odd, though, was having to relearn how to see. From birth, we're naturally used to focusing our eyes at the distance of the object we're looking at, and we actually have quite a narrow depth of field. As a result, when we shift our point of view from a near object to a faraway object, our eyes move and deform to get the right focus. However, in a 3D film, the objects aren't at the distance you think they are, and so you find yourself focusing on the wrong place. (Which is, I should add, made worse by the aforementioned glasses problem.) If the entire scene is in focus, but feels 3D, you have to learn not to refocus your eyes as you look around the image on the screen.

It's worth a slight digression here on how 3D works. It's not actually 3D, it's stereoscopic, and it's an optical illusion. The glasses are used to split the image on the screen, so each eye sees the world from a slightly different angle, as if it were looking at a real object. However, all you're looking at is a flat image (or two flat images if it helps to think of it that way). Everything you see is at the same distance - in my case, about ten rows or thirty feet away, so to get optimum focus, you should always focus at 30 feet.

Hence the confusion your visual system (eyes and brain) suffers: those hands that appear to be just inches away are in fact thirty feet away, and the trees outside the window that appear to be a hundred yards away are also thirty feet away. As a result, your brain doesn't know where to look to get the best view. And, more confusingly, as you move your head side to side, you can't get a different view of what's in front of you - you'll never see the back of Dad's hand, no matter where you stand. It ain't real. It's an illusion.

Which leads me to the second major issue, that of focus in the film itself. Over the last 80-odd years, we developed a grammar of film that we all naturally understand. Essentially, the thing that's in focus is the thing you should look at. That's how you direct your audience's view around a 2D image. But in a 3D world, it feels odd that there should exist parts of the world that you can't focus on, no matter how you try. In the real world, your focus is where you are directing your vision. You've never experienced a world where you can't control the focus. When you watch a 3D film, you feel you're looking into a "real" environment, even in a puppet show like Coraline, and using focus adds a strange and unexpected level of artificiality that makes you aware that this is still a film construct, not a miniature world.

It's even stranger when they rack focus during a shot. In the 2D world, we're used to this bit of film grammar. First we focus on Fred, and then as Jo speaks her lines, we focus on her. But in the 3D world, we're not used to having our focus pulled around in this way, and our brains have to work out what's going on. The result is quite disorienting at times, only momentarily, perhaps, but that's enough to interfere with your sense of relaxed viewing and with your total involvement in the story.

Staying with the theme of disorientation, cutting styles in 3D are something else that you need to relearn how to interpret. We're all used to cuts in films, whether they're from person to person, as in a dialogue, or from a long shot to an close shot. We've spent tens of thousands of hours getting used to watching it, and we know what it means. (And anyone who's ever done any editing will know only too well what it takes to learn to do it right, and how unwatchable it can be if you do it wrong.) In 3D, though, the experience is quite different, because of the heightened level of immersion. You suddenly go from looking down on a world, to being in it, or you teleport from one position in the world to another one. Again, it may be only momentary, but that's enough to make the narrative feel jerky. In a fast-cut sequence, where you may be changing your viewpoint every second or two, that's enough to make it completely unintelligible.

So, what does this mean for movies?

At times, watching Coraline, I felt like the early film audiences must have felt watching D.W. Griffith films, trying to make sense of his cutting style. It reminded me what it was like playing my first 3D first person shooter games.

Today, I saw the exact same movie trailers I saw yesterday, but this time in 2D. That really threw into sharp relief what works in 3D, and what doesn't.

I think we're going to have to develop new forms of cinematography for 3D if we're going to make it work. When it works, it's amazing. I found myself watching Dark Crystal today and thinking how incredible it would look in 3D. But we're going to have to adapt the rules of film to the new medium. We have to re-understand how to use focus; we have to come up with less confusing ways of cutting; we have to work out which shots work best in 3D, and how to composite the frame differently. And, perhaps most importantly, we have to drop the gimmicky shots that are only there to show the audience we can shove stuff in their faces. Do we really need any more tyrannosaurs leaping out of the screen right at us?

The technology is damn near there now, after over half a century of experimentation. What needs to happen next is for film-makers to learn how to use it effectively.

Oh, my review of Coraline? Go see it. Go see it in a cinema, in 3D, while you still can. Don't wait for the DVD and watch it at home, you'll be missing out. I nearly did.
Posted by Matt Kelland at 5:11 PM 12 comments:

So there we were last weekend, happily photographing M-109, which as I'm sure you all know isn't a German WW2 fighter plane, but is in fact a barred spiral galaxy approximately 46 million light-years away in the constellation Ursa Major, when Rhys decides he needs a pee. So seeing as it was bloody dark, what with it being the middle of the night in the middle of nowhere, Paul gives him a green laser to light his way as far as the hedge. Well, what do you expect when you give a teenager a laser? Rhys waves the laser around, right across the view of the telescope. Which ruined the picture. 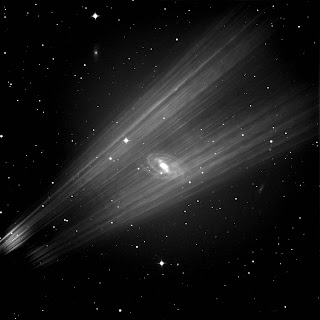