A few weeks ago, we went to the Holy Land Experience, just to see what's actually behind those fake Roman walls.
Well, it was an experience, there’s no denying that. It’s one of Orlando’s lesser known theme parks. (Well, legally, HLE is a church, which means it doesn’t have to pay taxes, even though it rakes in an absolute fortune. Nice deal if you can get it.)
It was pretty much what you’d expect from a theme park. Plastic religious stuff, presentations about as sophisticated as an elementary school play, overpriced refreshments, and people dressed up in silly costumes. That, however, isn’t what interested me. 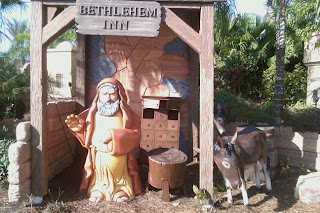 What I was mainly there for was the people-watching and to understand the way Christianity is presented in America. There was one huge church group there, and it was refreshing to see that many of the teenagers were giggling as much as we were when faced with giant plastic whales, cardboard cut-out Jesus, and a gift shop full of cheesy souvenirs. 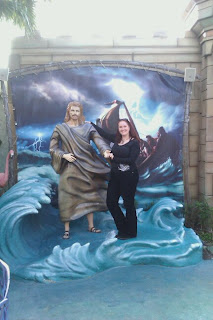 On the other hand, there were people simply in awe at the re-enactment of the Tabernacle in the wilderness when the Ark of the Covenant was revealed (was I really the only person in the room having an Indiana Jones moment?) and they actually broke into applause when paintings of various prophets were unveiled at the end of a tour chronicling the development of the Bible. And when it came to the Passion, many of them turned away in genuine tears at the crucifixion, and there were shouts of Hallelujah when Jesus came back like a disco star at the end complete with shiny robes and finger pointed to heaven like John Travolta. 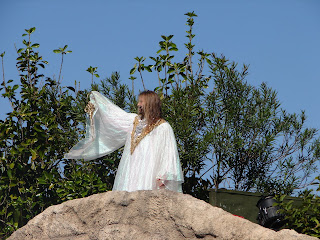 I’ve never witnessed that level of religious fervor before, and it was truly bizarre to see it in a place that was obviously so commercialized and fake. I can understand it at somewhere like the Wailing Wall, Lourdes, Mecca or somewhere with actual religious significance, but at a cheesy 15-minute performance at a theme park in Florida?
Wow.
Now, I’m pretty well read when it comes to religion, even though I’m not a Christian. My mum, who was there with me, did divinity and theology at university, and is even more familiar with the source materials. The Christianity presented at HLE is a complete distortion of and is riddled with lies, myths, and completely fallacious logic.
For example, at the exhibition of the history of the Bible, they showed us some Mesopotamian cuneiform writings, and explained how these proved the literal truth of the Bible. There was one tablet which chronicled Sennacherib’s destruction of a Hebrew army. This corresponds exactly with the Biblical account of the same battle, which proves that the Bible is historically accurate, and therefore accurate in all other respects. There’s just one small difference between the Assyrian and Jewish accounts; the Assyrians say they won the battle, the Jews say the Angel of the Lord slaughtered the Assyrians. This, apparently, not only attests to the truth of the Bible, but proves the superiority of God. To which the audience all nodded and praised the Lord.
Let’s just review that for a second. What they actually said was, “We can prove the Bible is true because it completely disagrees with all other historical sources?” Yet nobody questioned the logic. Not to mention the fact that even if the Bible did agree with the historical sources in this one respect, that does not mean that the rest of the book is automatically true.
Or how about the statement that the Bible was copied by hand many times, but there was never a single error or change? That’s just provably false, as any Biblical scholar will tell you. But this “fact” was put forward as proof that the Bible is truly miraculous, and again, the audience applauded and praised the Lord some more. And they didn’t even notice when two minutes later they were told about the different versions of the Gospels... 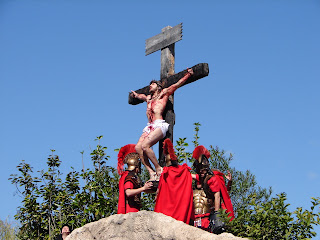 And their version of Christianity doesn’t even follow the damn Bible anyway. Where were the two thieves at the crucifixion? What happened to the bit of the story where Pilate offered to let Jesus go, but the people chose to release someone else? Conveniently snipped in the interests of drama. And those plastic animals going into the Ark two by two? That’s not actually what it says in the book.
The LORD then said to Noah, “Go into the ark, you and your whole family, because I have found you righteous in this generation. Take with you seven pairs of every kind of clean animal, a male and its mate, and one pair of every kind of unclean animal, a male and its mate, and also seven pairs of every kind of bird, male and female. (Genesis 7, 1-3)
And of course, all those paintings of Jewish prophets and apostles? Not a trace of a Semitic gene among them. They were all blond, with blow-dried hair, pale-skinned, and looking like Charlton Heston. It’s completely pandering to Western stereotypes. Basically this is Christianity taken from a Victorian children’s Bible and turned into easily digestible family entertainment, based on misreadings of the texts and fallacious extrapolations dressed up to sound like learned teachings. It was exactly what I expected, but it still bemuses me that over half the people in this country believe that it’s the literal truth, it’s the word of God, and it’s the cornerstone of their faith.
That’s the true horror of the Holy Land Experience. 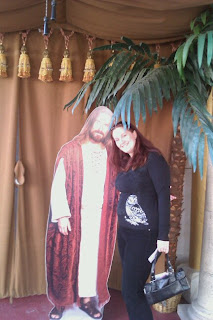 Netflix is getting worse and worse. Apart from the fact that the service quality is degrading (frequent stops and poor image quality, and the new imposition of the limited number of devices that nobody had ever heard of before), they've just released a pointless user interface "upgrade" for the PS3 version that makes it considerably harder to use. This screenshot shows four different Netflix layouts. We used to have the top right one. Now we have the bottom right one.
In detail:
In other words, it's now incredibly slow and inefficient to use, and I cannot see any benefit to the user in doing it this way. It's a typical case of an upgrade for the sake of it.
Looks like I'm not the only person who's fed up either. Here are some extracts from the PS3 forums.

I also hate the change. What I do now is use my PC to search Netflix, and then add anything that I'm interested in to my instant queue.
The new menu stinks! I've only had netflix for a week.The old menu that allowed you to browse thousands of titles in an endless amount of sub categories was awesome. It allowed me to see programming that I could never find with the stupid, useless,regressed, going backwards setup that is in place now.It is completely rediculous to have to browse titles on your pc then search them on your ps3.
OMG this new menu is on purpose! I signed up with Netflix a few days ago and i had a menu that i could drill down through genres and find exactly what i wanted, then at some point this afternoon it changed to this crap. I just got off the phone with customer service from netflix and the guy told me this was a change they made based on customers who preferred it. I told him it's terrible and that having to search on the laptop and then back to the PS3 is redundant and a waste of time.
I also find the menu change to be annoying, they took an awesome service and made it intolerable. I also must use my PC and set it in my instant queue, they need to fix it back.

I used to love Netflix. Now I'm finding myself questioning every day whether it's worth the hassle. I'm off to post a couple of formal complaints on their FB page: