I love free stuff. Who doesn't?

And I really love free books. For the last couple of months, I've downloaded on average two free novels and two short stories a day. I'm not talking about a load of old public domain stuff from Gutenberg, or classic literature from Amazon. I'm talking about modern books by contemporary authors.

It's not like I'm downloading any old rubbish. Every single day, I get carefully selected recommendations for between twenty and thirty free novels, covering a huge variety of genres. I've downloaded loads of books from the backlists of well-known print publishers. I read tweets and Facebook posts from dozens of authors and digital publishers talking about their new work. There's no shortage of free e-books, and the rate is rocketing. Nobody's quite sure how many e-books are published every month, but a figure of 50,000 seems conservative. However you look at it, that means there are hundreds, if not thousands of free e-books coming out every single day.

Of course, I'm not actually reading two books a day. I'm accumulating reading material faster than I can possibly absorb it, and it's not costing me a penny. As a reader, I love this. All my reading needs are being taken care of, totally gratis, and completely legit. There are enough authors out there who want to give their work away that I don't need to buy a single book. 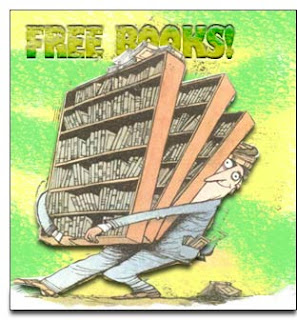 As an author and publisher, however, it concerns me massively. With this much good quality free material around, who's going to buy books?

A lot of writing blogs will tell you that the secret to making sales is to give your book away, build up a following, and then start charging when you've started to become popular. Sadly, it usually doesn't work. I recently published some of my fiction works. When they were free, I was getting 1000-1500 downloads a month. Once I put the price up to 99c, that dropped to just 1 or 2 a month - which is typical of most people's experience, from what I can tell. They'd been getting 5 star reviews, but even so, people weren't prepared to pay even a dollar. Why should they, when there are thousands of perfectly acceptable free alternatives?

A year ago, I wrote about the problems of the "freemium" software model. It's a nice idea in theory: you make a free product, get a following, and then charge your most dedicated users for a pro version. What usually happens, though, is that just as you start to charge, someone else comes along with a free version of whatever you're now charging for, and your customers go elsewhere. As long as there are people giving away free stuff to build their market share, it's almost impossible for anyone else to charge.

Obviously, this doesn't apply to the market leaders. As Seth Godin pointed out, if you want to read the latest Neil Gaiman or Terry Pratchett, you have no alternative. They're unique, they're the writing elite, and people will always buy their work. In fact, they'll buy it again and again even if they already have it. In some ways, it's less about the actual reading, and more like collecting. But for the majority of authors, there's no compelling reason why I need to buy their books unless they're part of a series which I've already invested time in.

The problem isn't the price. I got exactly the same number of sales at $0.99, $1.99 and $2.99. Single digits. If someone's decided they're prepared to pay for a book, then they're not going to hum and ha over a dollar or two. The fact is, there's a huge hurdle between free and paid, even more than between cheap and mid-price.

The problem is simply that the majority of people are not prepared to pay for e-books, because they know they can get plenty of good books for free elsewhere. Many readers have become conditioned to believe that digital books should be free. I've lost count of the number of people who've told me that publishers should make all their backlist available free "because it doesn't cost anything for an e-book". That's simply not true - even if you start from a digital copy, it takes time to make the digital book files, upload them, and so on. If all you've got is print, it needs to be scanned, which is time-consuming. And that's before you even get into the legal side of it, since the chances are that the original publishing contract didn't include digital publication.

As more authors give their work away, the more this view is becoming entrenched. With everyone scrambling to attract readers by giving away freebies, we're basically telling readers that there's an unlimited supply of good material and there's no need to pay. In fact, there's no real incentive even to read them. Grab them, stick them on your Kindle, and who cares if you forget about them? It's not like they actually cost anything. It's not like they're actually worth anything... 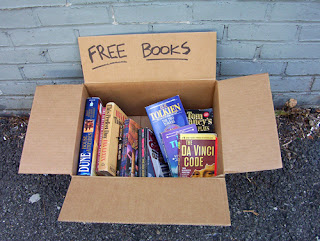 In the coming year, I don't think the big debate in e-publishing will be about what the "right" price will be. I fear it'll be about whether indie authors, small publishers, and self-publishers will be able to charge at all, or whether we'll be overwhelmed with the flood of free content.

Side note: during the writing of this blog post, I received 7 messages offering me a total of 41 free books, and downloaded 3 novels and 4 short stories.
Posted by Matt Kelland at 6:20 PM 9 comments: